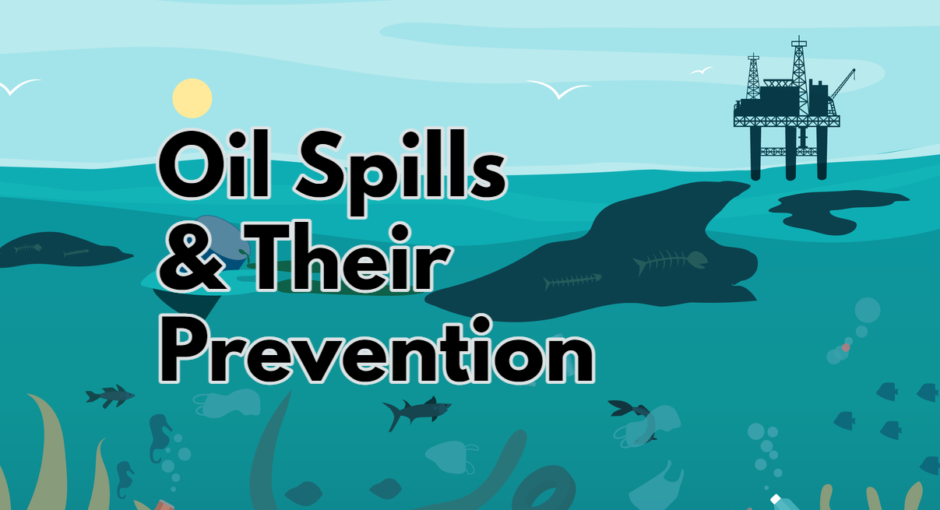 Oil Spills and their Prevention

An oil spill is the release of liquid petroleum hydrocarbons into the environment and is a form of pollution. Human activity primarily causes oil slicks and is especially harmful to sea wildlife. They can also occur on land, although marine spills attract far greater media attention. Oil slicks may be due to releases of crude oil from tankers, offshore platforms, drilling rigs, and wells. Refined petroleum products, heavier fuels used by large ships, oily refuse, or waste oil also account for many of these accidents. An oil spill clean-up uses up a considerable amount of resources.

They reduce the insulation capacity of bird and mammal fur. They decrease their buoyancy in water, as well as the thermal insulation of their bodies. A clean-up is difficult and depends upon many factors. This includes the type of oil spilled, the temperature of the water, and the terrain of the affected shorelines and beaches. In extreme cases, they may even take years to clean up. They can have disastrous economic, environmental, and social effects. So they attract very strong media attention and political uproar. The public highly scrutinizes government response to such incidents. It also sheds light on what may be the best actions to prevent such incidents from taking place, to begin with.

Sources and Causes of Oil Spills

Human error, natural disasters, technical failures, or deliberate releases may be some of the causes of oil slicks. Human error causes an estimated 30-50% of them. Equipment failure or malfunction accounts for about 20-40% of such incidents. Their causes are further classified into deliberate releases, such as operational discharges or acts of war and accidental releases. Accidental oil slicks have been studied intensely, although some of the major recorded incidents, such as the Gulf War Oil Spill and Kuwaiti Oil Fires were deliberate acts of war. Such oil spill clean-ups can often last several months. Research on the sources and causes of oil spills identifies critical points in oil transportation infrastructure and estimates the propensity of oil spills occurring. This can help create prevention efforts and regulation policies.

Around 40-50% of all oceanic oil originates from natural seeps from the seabed. This equates to nearly 600,000 tonnes worldwide every year. Ecosystems have adapted to the regular releases of natural seeps. So they do not pose too many problems. Bacteria that live in oil seeps have evolved to eat oil particles.

Oil Tankers and other Ships

Sea vessels are a source of oil spills, either through operational releases of oil or through accidents. Operational discharges from vessels account for about 20% of all oil releases from ships and other modes of sea transport. Vessel operators’ lack of compliance with regulations often causes such discharges. This is a particular point of concern in regions where there is weak environmental regulation. Arbitrary discharges of waste oil and water containing such oil residues also cause spills. The MARPOL Convention regulates such operational discharges. Although operational releases are frequent, they only spill small volumes of oil per discharge. They are often not in the focus of attention regarding oil spills. Additionally, operational oil discharges have been steadily decreasing over the years. They have reduced by around 50% since the 1990s, as a result of better shipping procedures.

Accidental oil tanker spills account for about 8-13% of all oil spilled into the sea. Collision, grounding, mishandling, and sinking mainly cause tanker spills. Large volumes of oil leak as a result of such accidents. All of the world’s major shipping routes pass through large marine ecosystems. Hence environmentalists view them as a major environmental threat. As much as 90% of global oil transportation is through tankers. A tanker oil spill clean-up requires significant funding. However, the number of spills and the volume of oil discharged per spill have both declined in recent years. Since 1992, the MARPOL Convention has mandated shipbuilders to fit large tankers (5000 dwt and more) with double hulls. This has greatly reduced the number of tanker spills. Other innovations, such as GPS and sectioning of ships and sea lanes in narrow straits have also helped.

These days offshore rigs cause only 3% of spills at sea. They usually occur as a result of a blowout. They may go on for months until rescue agencies drill relief wells. Enormous volumes of oil leak as a result. The worst such case was the Deepwater Horizon spill. Although drilling technologies have improved considerably, oil companies often move to exploration sites in more and more difficult places. So it is difficult to assess the impact improved drilling technologies have had on reducing spills from offshore oil rigs.

Pipelines and Other Sources

Oil spills from pipelines account for just 1% of oceanic oil pollution. They are largely unreported and a lot of pipeline leaks happen only on land without the oil making it to the sea. However, in the past 40 years, pipeline leaks have increased significantly. A prominent example is the pipeline leaks in the Niger delta. Trawling of fishing boats, natural disasters, pipe corrosion, and construction defects can cause pipeline leaks. Deliberate acts of sabotage may also sometimes cause oil slicks.

Recreational boats may also release oil into the sea because of operational or human error and unpreparedness. However, they do not release large volumes and are also hard for environmentalists to monitor. Oil can reach the sea from land-based sources as well. About 11 % of oceanic oil pollution is caused by runoff oil and oil from rivers. This may also be caused by the oil on roads from land vehicles, which is then flushed into the sea during rain. Purely land-based oil spills are far less problematic than maritime oil spills. Oil on land does not spread as quickly as in water, and hence it is much easier to contain.

It is always better to take measures that prevent oil spills, to begin with, rather than finding yourself in a situation that requires a clean-up. Critical areas of prevention include technological assessment of equipment and procedures, and protocols for training, inspection, and backup plans for the avoidance, control, and shutdown of offshore operations. The response includes technological assessment of equipment and procedures for cleaning up oil spills, and protocols for the detection, monitoring, containment, and removal of oil spills, and the restoration of affected wildlife and habitat.

The United States government requires all offshore oil facilities in US territorial waters to have prevention contingency and emergency response plans in place. These regulations are enforced by the Bureau of Safety and Environmental Enforcement. The United States Environmental Protection Agency (US EPA) manages oil spill prevention and recovery in inland waters. The US Coast Guard manages these responsibilities in coastal waters and deep seaports.

The main safety control devices for oil drilling are blowout preventers (BOPs). Oil companies have been using BOPs for nearly a century in land-based oil drilling operations. The same technology has been adapted to be used for offshore oil drilling as well. Repairing and maintaining offshore equipment is far costlier than land-based equipment. This technology prevents oil leaks from rigs, whether they are on land or at sea.

Another way to prevent spills from offshore oil wells is by installing well casings. They are large diameter pipes that are assembled and installed into recently drilled sections of a borehole in the seabed, from where the oil is extracted. It is done with a set of nested steel pipes, cemented to the rock walls of the borehole. Each section is suspended by a threaded adapter inside the bottom end of the section above. Failure of either the casings or the cement may result in leakage of oil into the seabed, which may then flow to the water surface, or it may also cause a blowout at the wellhead.

Cleanup and recovery from an oil spill is a challenging task. The effectiveness of a clean-up operation will depend on many factors. They include the type of oil spilled, the water temperature, and the types of shorelines and beaches in the vicinity of the affected area. They are also extremely expensive, often costing billions of dollars. However, microorganisms such as Fusobacteria species have demonstrated their potential for future clean-up operations because of their ability to colonize and degrade oil slicks on the sea surface. This can turn out to be an economically feasible clean-up method as compared to conventional clean-up methods. Clean-up methods also include:

All these methods require oil sector workers as well as oil slick recovery staff to be trained to handle hazardous substances, such as oil. We offer exactly the training required for these kinds of operations. Please click here for details.

Crude oil and refined fuel spills from tanker ship accidents have damaged vulnerable ecosystems in Alaska, the Gulf of Mexico, and many other places. The volume of oil spilled during accidents has ranged from a few hundred tons to several hundred thousand tons. Generally, oil spills at sea are far more damaging than those on land. They can spread for hundreds of miles. So they can easily destroy plant and animal ecosystems in coastal areas. Seabirds and other animals in coastal habitats are particularly vulnerable. No discussion about oil spills is complete without mentioning the Deepwater Horizon and Exxon Valdez oil spills.

Both these incidents took place at sea. Environmentalists consider the Deepwater Horizon oil spill to be the worst industrial disaster in US history. It happened in 2010. It was an oil drilling rig owned by The British Petroleum Company. An explosion caused it to leak about 5 million barrels of oil into the Gulf of Mexico. 11 workers on the rig were killed. It caused extensive environmental damage, leaving over 8000 animal species dead. According to environmentalists, even 11 years later the area is still yet to completely recover.

The Exxon Valdez spill occurred in the Gulf of Alaska in 1989. It was an oil tanker that ran aground in Prince William Sound on the Alaskan coast. It leaked 260,000 barrels of oil into the ocean and affected over 1300 miles of coastline. Although there weren’t any human casualties, it caused extensive damage to plant and marine wildlife in the area.

How To Report OSHA Violations

Everything About Safety Data Sheet (SDS) 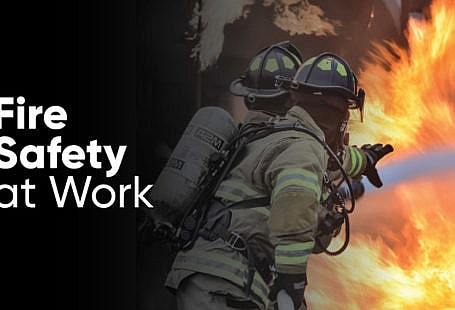 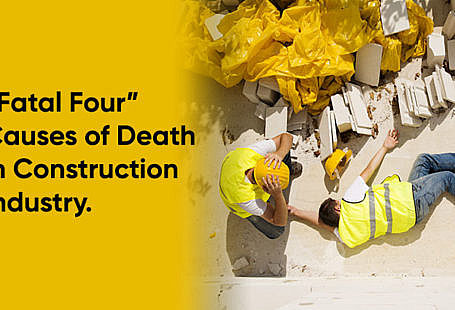 “FATAL FOUR OSHA” Leading Cause of Deaths in the Construction Industry.